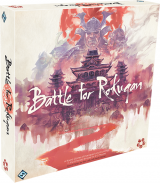 Conquer the realm and bring honor to your clan in Battle for Rokugan! This turn-based strategy game of conquest and mayhem puts players in the role of Rokugan daimyō struggling for control over the rich land of the Emerald Empire. Leaders must balance their resources, plan their attacks, and outwit their enemies to ensure their clan's victory. The land is there for the taking. The most honorable daimyō will win the day!

Battle for Rokugan is a turn-based strategy game played over the course of five rounds in which two to five Rokugani daimyō must form their strategies, distribute their forces, and battle for control of the provinces that make up the Emerald Empire.

By bluffing, using diplomacy, and placing combat tokens, the daimyō expand their Clans’ territory and move closer to victory. With each province they conquer, the daimyō earn honor for their Clan, and if they take over an entire territory, they further bolster their strength. In the end, the most honorable daimyō will win the day, but temptation and the fear of failure are ever-present.

Fight for the honor of your clan. The land is yours to claim. Take control of the Emerald Empire and win the Battle for Rokugan!